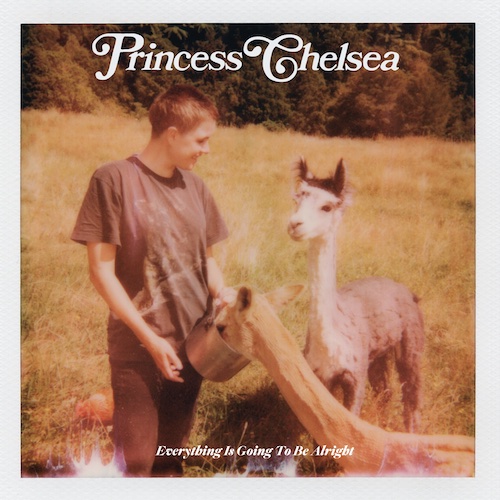 New Zealand born cult producer Princess Chelsea delivers her latest single ‘The Forest’. Recorded live in one take at ‘The Lab’ studios in Auckland, ‘The Forest’ is a hypnotic outcry into the void; a cunningly crafted sonic metaphor about enduring dark times and emerging whole from the other side. ‘The Forest’ is the first single off of Princess Chelsea’s upcoming “nervous breakdown album” Everything Is Going To Be Alright due October 7 via Lil’ Chief Records.

‘The Forest’ is a 2000s tinged alt-pop dream that opens with the throbbing, nostalgic crunch of an electric guitar. There is something delightfully reminiscent in the track’s simple, consistent production. Chelsea’s voice is a gauzy, tentative wail that will work its way under your skin as it blends perfectly with her band’s mesmerizing instrumental hum. Starting softly and then building to a resonant, undeniable peak ‘The Forest’ is a powerful revelation about tenacity and resilience.

Princess Chelsea shares this of the track: “This was the first time I have recorded a song live in the studio with my live band and the music video was filmed while we were recording it on an old VHS with funny built-in effects. We tracked all the instruments and vocals live in one take – which is the opposite of my usual process (layering audio tracks over a long period of time in my bedroom. It was a more collaborative process than usual – the live Princess Chelsea experience has always been somewhat of a surprise to people and this song and video is quite representative of my live show. The song ‘The Forest’ is about overcoming adversity, preparing yourself to mentally get through a hard situation. People often go to nature, perhaps for a run or exercise, as a form of therapy – The Forest is a metaphor for whatever you need to do to get through. For me it’s often a literal forest :).”

The track’s release comes with a music video (DP Bridget McCarthy), which shows an intimate glimpse into Chelsea and her band’s experience recording the track live at ‘The Lab’ studios in Auckland, New Zealand.

Everything Is Going To Be Alright: