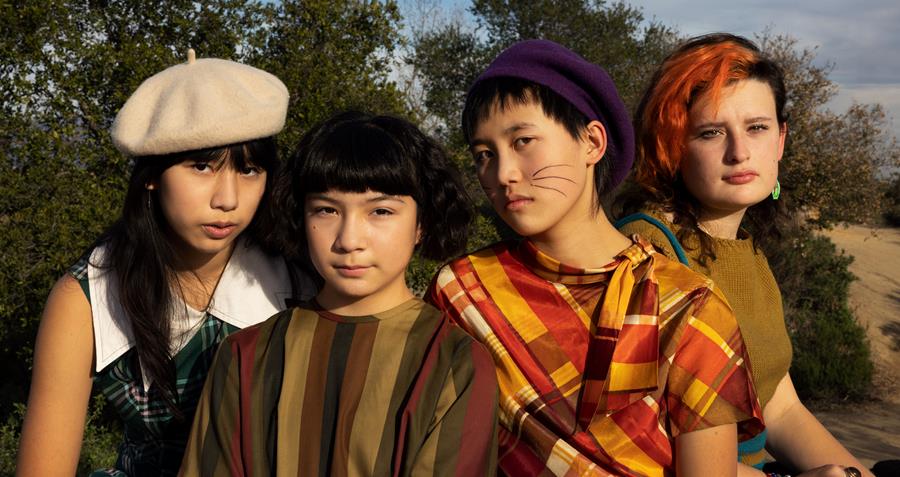 After spending the past month teasing their upcoming record LAND TRUST: Benefit for The North East Farmers of Color (available exclusively on Bandcamp) – Bikini Kill’s Erica Dawn Lyle and The Raincoats’ Vice Cooler mark the release of their debut album today with the album’s latest single, the all-out punk banger ‘Lost in Thought.’ This song is the duo’s collaboration with The Linda Lindas and Bikini Kill’s Kathi Wilcox.

As with all of the other songs on LAND TRUST – including the record’s first two singles, made with Kathleen Hanna and Kim Gordon respectively – the song was the result of a remote collaboration between Lyle and Cooler that began in the early days of the pandemic. Lyle approached Cooler with the idea that they’d write songs together via file sharing ask their friends in their music community to add vocals, lyrics, and bass. Then they’d make the results available as a benefit record.

Lyle says, “When we came up with the music for this one, it just felt like a rager and it brought to mind for me the pure exuberance of The Linda Lindas, so I suggested we invite them to sing on it. I thought of asking Kathi to add bass because I just remember how much we all enjoyed playing with and being around The Linda Lindas when they opened for Bikini Kill at The Palladium in 2019. Having them on a track with Kathi also really fit with the general theme of the record we were making which was shaping up as an intergenerational lineup of lady rocker badasses.”

Lucia of The Linda Lindas commented on the songwriting process: “We all liked the idea of a call-and-response vocal thing in the verse, which really just took after the instrumental part. It’s about feeling overwhelmed by everything bottled up in your brain and getting so lost in yourself you become unaware of your surroundings.”

Bella chimes in: “In the bridge, there’s this chaos. It’s meant to represent how sometimes there are so many ideas or thoughts or just things on your mind, which gets so busy, and it’s supposed to feel like just the right amount of too much.”

‘Lost in Thought’ brings out the punk roots of The Linda Lindas (collectively made up of teenagers Eloise Wong, Lucia de la Garza, Mila de la Garza and Bella Salazar), who deliver chaotic, high energy vocals that are complemented by Cooler’s animalistic drumming, and Lyle’s fierce punk riffs which are grounded by Kathi Wilcox’s smooth bassline. Cooler says of the collaboration, “I grew up learning to drum to records that Wilcox played on. It was a surreal experience to get to work with someone who has written so many great songs. And The Linda Lindas feel similarly – and they really elevated the collaboration with their incredibly perfect vocal contributions.”

While all of the artists involved have worked to raise funds for various organizations they believe in, this song in particular is a benefit for Northeast Farmers of Color Land Trust (NEFOC) – a grassroots, Indigenous-led group who acquire land in order to return it to Indigenous nations and POC farmers. Lyle says of NEFOC, “They help farmers purchase the land and set up legal land trust structures so that the land is collectively owned in perpetuity. They also help fund the start up of black-owned farms and lobby big corporate landholders to simply give land back to Indigenous and POC groups”. 100% of the proceeds from the record will go to the purchase of new land.

Eloise had this to say: “It’s the best when people not only make music that sounds cool, but music that can actually make a difference. All I want is to be able to make a difference and effect change in the world, and music provides a great outlet for us to do that. It’s so awesome how even if it’s just one song, music can be so powerful and do so much.”