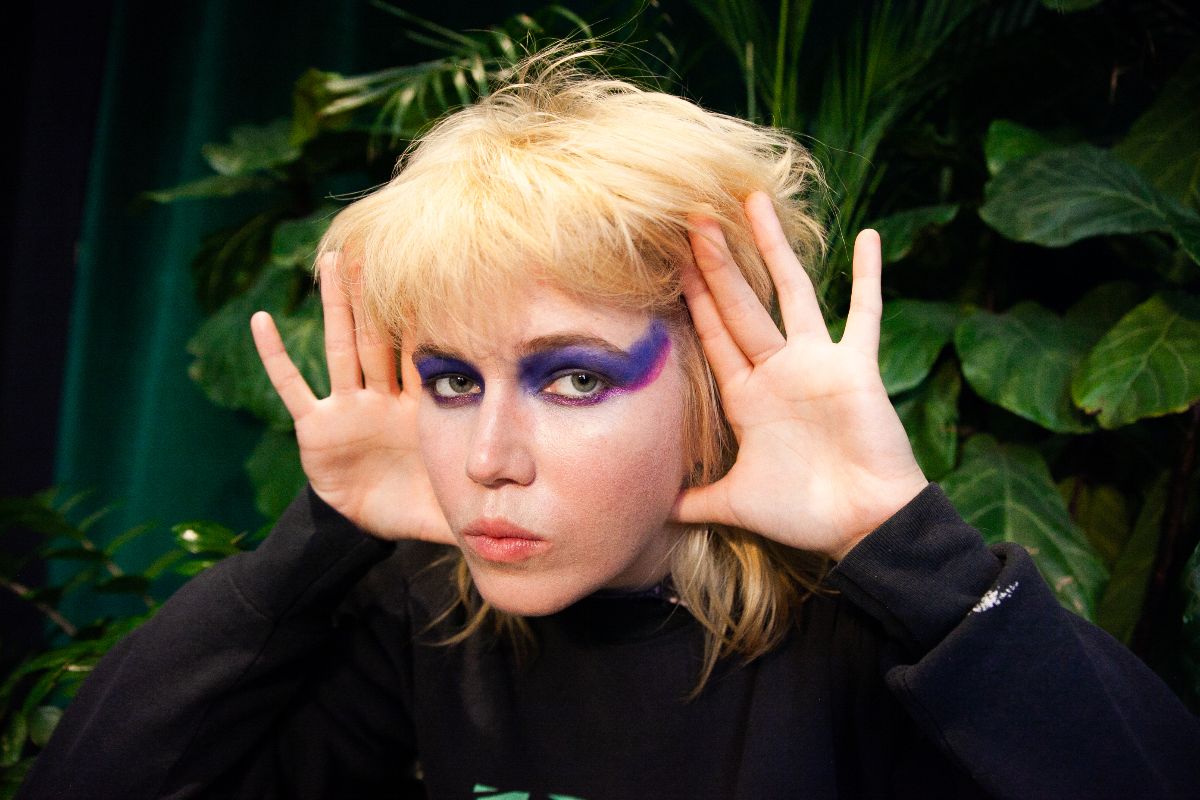 Notable guitarist/singer-songwriter Liv Slingerland has released her solo debut album, Hey You, today. It’s only fitting that the record has found a home at the “woman-informed, queer-happy” Righteous Babe Records, the label founded by fellow guitar slinger Ani DiFranco, and that Hey You is coming out while Slingerland is on tour playing guitar for fellow queer pop artist Halsey.

While she’s new to the national scene as a solo artist, a lot has happened in the lead-up to Liv Slingerland’s long overdue LP. For one thing, she’s been an in-demand bassist and guitarist for such rising musicians as Lauren Ruth Ward, Robert DeLong, Alex Lahey, and the Overcoats before her run with Halsey. Most of these gigs were itinerant tours — a crash course in how to slay every show and stay grounded, mentally and physically — leading up to a once-in-a-lifetime opportunity to play Saturday Night Live as part of Olivia Rodrigo’s live band. (The pop star also tapped Slingerland for her forward-thinking concert film Sour Prom.)

We had a chat with Liv all about her life right now, touring, Hey You, her creative process and more. Read the Q&A below.

Hi Liv! How are you? Life has been pretty crazy busy for you recently! What does a typical day look like for you at the moment? We understand you’re on tour with Halsey currently. What has that been like?

“Hi! I’m doing well. I’ve been in rehearsals and on tour with Halsey since the beginning of May, so we’ve gotten into a pretty good groove of playing shows. I usually get up in the morning and go on a run wherever we’ve landed for the day, then shower and eat. I have a good chunk of time to practice or write and record before and after soundcheck if I’ve got something I’m excited to be working on. Sometimes I’ll just end up hanging with the band and crew before we play the show and then get ready to do it all over again the next day.”

After years of touring the world with loads of other megastars, you are finally ready to make your solo debut. What can you tell us about your upcoming record Hey You? What/who were your musical influences?

“I have a lot of long lasting influences from listening to music with my parents growing up – Tom Petty, Joan Jett, Chrissie Hynde, The Ramones, Jimi Hendrix, Talking Heads, etc. A lot of my album thematically deals with relationships, especially surrounding coming-of-age experiences and coming out as queer as a young adult.”

What was your creative process like for the record? We understand that it was a long time in the making! What did you enjoy most about it? Were there any challenges and how did you overcome them?

“Some of the songs, like ‘An Entire Lifetime’ and ‘God Forbid’, I recorded with my friend/producer Wolfy in a studio in 2020 when I was home from touring on and off. A lot of the others I recorded mostly at home during Covid and sent to Math Bishop to add live drums and other production. He ended up mixing everything, too, and was a really important piece of finishing everything up. A lot of the songs I wrote on just guitar and had brought to my band to arrange as well. The most challenging part of the process was the timeline and budget aspect of everything, especially being away touring with other artists.”

When will you be touring the new record? Is there anything you’ve taken from touring in the last few years with other artists that you’ll be applying to your own tour? What are your favourite and least favourite things about touring?

“I’d love to tour the new record as soon as possible! Working with other artists has given me the experience and understanding of putting together a tour with teams of different sizes. I love constantly moving and being in a new place almost every day, especially when there’s time to explore. The biggest drawback I find is missing out on friendships and relationships at home.”