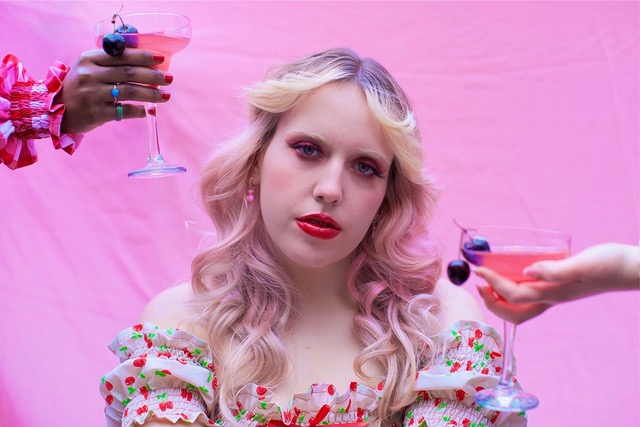 Unapologetically queer DIY pop artist Foxgluvv is back with the new double single release Lesbians on the Beach – featuring the tracks ‘You Love Her’ and ‘2 Cherry Margaritas’.

Combining 80’s inspired production with the dreamy vocals she’s become known for, ‘You Love Her’ is a laidback pop masterpiece. Heartfelt lyrics float effortlessly above synth-laded beats as Foxgluvv’s lullaby tones sing “If you’re thinking bout her right now, if you wonder then you probably are”. The songs is about celebrating the stereotype narrative that Lesbians fall in love and move in together within a week rather than laughing at it. Foxgluvv says; “I think it’s a beautiful thing for us sapphics to feel so connected with each other, and I wanted to write a love song dedicated to this.”

‘2 Cherry Margaritas’s otherworldly production showcases Foxgluvv’s left field pop perfectly, a style that the songstress has previously described as “hangover pop”. In sultry tones Foxgluvv sings “hair in the breeze wanna feel her fingers run between it, two cherry margaritas, on the beach with her” as she sets the scene of an idyllic summer date.

Talking on the project Foxgluvv says: “I decided on the title Lesbians on the Beach because I really wanted to create a sapphic summer landscape in the mind of the listener. I also wanted to defeat any stereotypes and expectations of what would be expected from a title like this – you see Lesbians on the Beach and probably assume it’s going to be raunchy because that’s what has been painted of sapphic relationships… but when you listen to the songs, it’s all about love and care, and being intimate with another person who you adore. The process behind this project has been completely different and out of my comfort zone – I usually work with a producer, but this time around I let my creativity soar and decided to produce the project myself. I really enjoyed letting go of my usual process and having fun with it.”